A Christmas projector is the easiest way to light up your home or garden with a festive look and feel. Whether you want a static, moving or animated graphic projection, we have a great list of recommendations that take just minutes to setup. 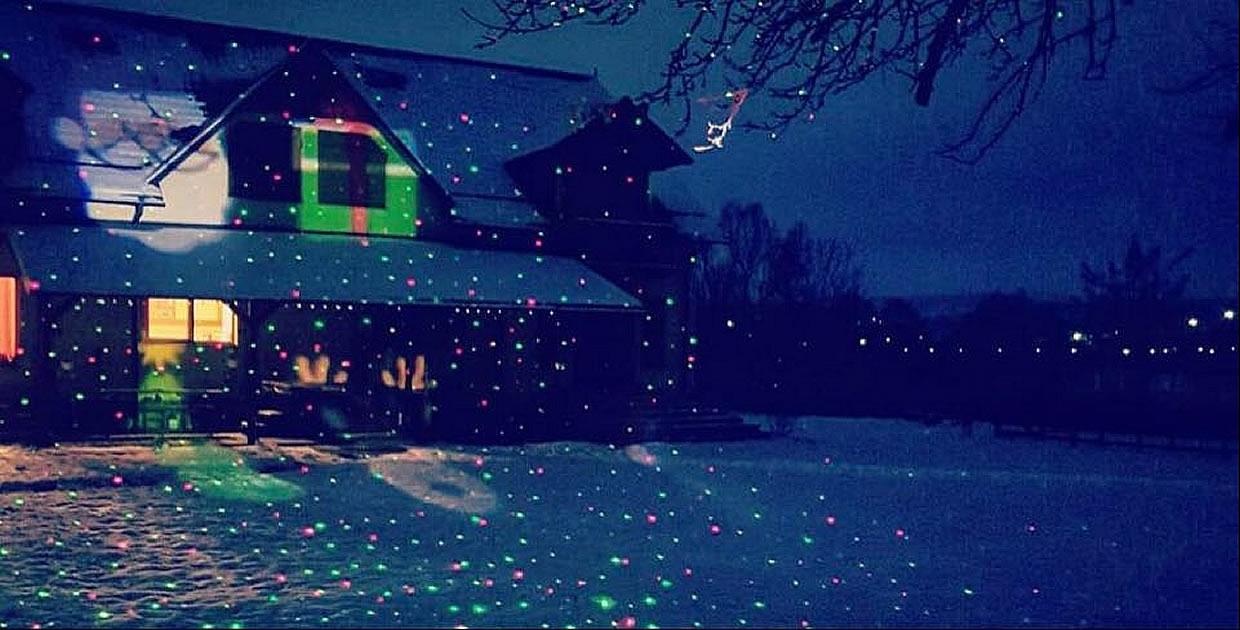 The best Christmas projector is the TEDD LED Spotlight, which is a plug and play device that’s available with a Santa Claus or snowflake output. If you are willing to spend a bit more, the Poeland RGB projector is a premium alternative that offers a range of lighting effects and is built to the highest of standards.

There are two main types of Christmas projectors, the first includes LED laser lighting in the form of multi-coloured snowfall effects and other graphics. The other is animated cartoons, which are made possible using pattern slides that are inserted in front of the light being projected from the device.

Below is a list of the best Christmas projectors that can be installed in minutes and output a festive light show.

By far the most popular Christmas projector lights are those manufactured by the TEDD brand. They offer a choice of three projections that include white snowflakes, colourful snowflakes and even Santa Claus.

Although relatively cheap, the device is CE, UL, SAA, RoHS, PSE certified and even comes with a 12 month warranty.

Other features of the TEDD Christmas Projector include:

The TEDD Christmas Projector ticks all the boxes in terms of its projection and value for the money. There is only a small amount of assembly required so it can be fixed to the ground but it’s far easier than hanging up fairy lights.
Check it Out

The Poeland Projector is a premium option that features a variety of effects and even a remote control. Whether you use the projector indoors or outdoors, it comes with a base or ground stake for maximum stability on the floor.

In terms of the projection effects, you are able to set the LED’s to a single, dual or triple combination of colours as well as set the lights to move around at a pre-set speed.

Other features of the Poeland Star Projector include:

Although expensive, the Poeland Star Projector is built to the highest of standards and produces a great Christmas light show wherever its used.
Check it Out

One of the cheapest Christmas projector lights that’s actually worth buying is the Inno Tech device. It comes with the choice of 17 different slides (5 of which are suitable for Christmas) and even a remote control.

Other features of the Inno Tech LED Projector include:

Overall, the Inno Tech Christmas projector offers outstanding value for the money and plenty of high quality slides to choose from. Considering the low price tag of the projector, you cannot go wrong and it won’t disappoint.
Check it Out

Although the UK doesn’t get much snow during December, you can recreate the snowing effect with the Landee Projector. It provides a real snowfall effect with rotating LED white spots, which can cover a large surface area.

Other features of the Landee Snowfall Projector include:

The Landee Snowfall Christmas Projector is a great mid-range option that features a variety of lighting modes and is built to a high standard. If you have already installed outdoor Christmas lights, the snowfall effect by this projector work perfectly alongside it.
Check it Out

The Mimojoy Christmas Projector is another popular option that outputs a variety of festive graphics without needing to replace the slides. It projects a bell, star, tree and elk, which rotate and are output in white, green yellow and orange.

Other features of the Mimojoy Christmas Projector include:

Overall, the Mimojoy Projector is easy to setup and produces a great laser light display with rotating graphics. It’s also relatively affordable and comes with a remote control, which is another great bonus.
Check it Out

The GAXmi LED projector is another mid-range option that combines laser lights with inserted pattern cards. It comes with 4 Christmas and 4 Halloween cards that slot straight into the device with ease.

Other features of the GAXmi LED Xmas Projector include:

It’s a great choice that combines laser LED lights with animated patterns for the ultimate Christmas laser light experience. However, it does have a slight drawback with a maximum working time of just 6 hours but this won’t be an issue for most people.
Check it Out

Christmas projectors save the hassle of climbing ladders and unraveling your fairy lights each year. Simply plug it in, place it on a base or in the ground and you are up and ready to go.

All of our recommendations include a selection of LED lighting or graphics and are suitable for all budgets. If you intend to light up your entire house, you may need a long extension lead as you will have to place the projector further away from your home.

Within some of our articles, Darimo may direct you to retailers, which may provide us with a small commission on any sales. This comes at no extra cost to you and does not affect our opinions on product quality. You can read more via our affiliate disclosure.